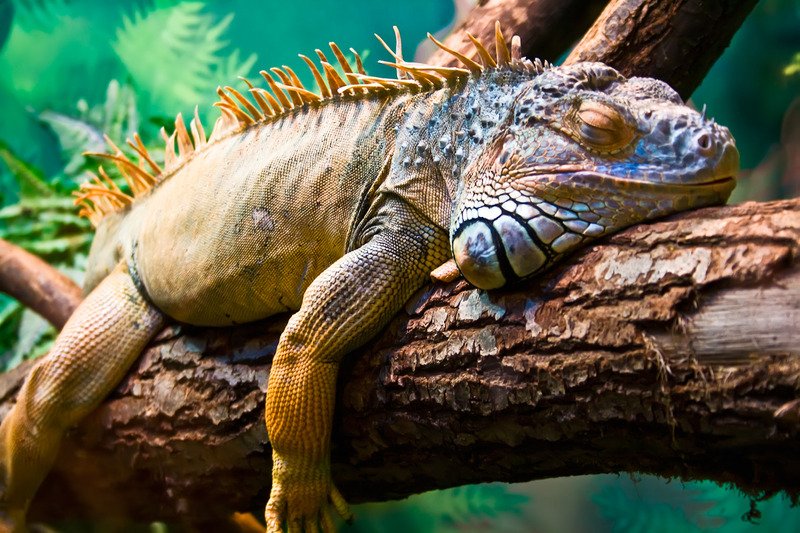 The animal kingdom is vast. There are over one million species of animals known to man. More and more animals are also being discovered every year.

However, vertebrates are vastly superior compared to invertebrates. They are bigger, more intelligent, have complex body systems, and exhibit complex movement. There are many vertebrate groups or classes but the ones best known to man are mammals, amphibians, reptiles, fish, and birds.

What Is a Lizard and what Is an Iguana?

A lizard is a reptile. It is a special kind of reptile that comes from the order Squamata and is closely related to snakes. Lizards are found in many places across the world and do not mind making peoples’ homes their homes. Many lizards are either omnivorous or insectivorous.

There are many types/ families of lizards known to man. An iguana is a special type of lizard. It belongs to a family of lizards known as Iguanidae. Iguanas are native to the Caribbean, South America, and Central America. They are primarily herbivorous aka they prefer eating plant matter.

Where are Lizards and Iguanas found?

Lizards are found on almost every continent on the planet except Antarctica. This is because there exist thousands of lizard species that are adapted to living in the different land habitats and environments found across the planet. Iguanas, on the other hand, are less common than lizards. They are mostly found in the Americas, Australia, and some parts of Southern Asia.

So if you are looking for a rare or exotic animal to keep as a pet, you should go for an iguana. A visitor to your place will be more fascinated by seeing a rare animal than seeing a common house lizard or any other lizard in an enclosure because they have probably seen it before.

How Many Species of Lizards and Iguanas Are Known To Man?

As of now (2020), there are nearly 6,000 species of lizards and 30 species of iguanas known to man. Since iguanas are a type of lizard, their 30 known species are counted as lizards.

How Different In Terms of Appearance Are Lizards and Iguanas?

Lizards have several similar physical features including moveable eyelids, external ear openings, and four legs. However, since most lizards live in different habitats, many of their features are adapted to survive in those habitats. For example, some lizards have rough and thick skin to prevent water loss in dry habitats, while others have got smooth skin to prevent them from getting stuck in mud.

Iguanas have a somewhat distinctive look. Most iguana species have got a biggish head, sharp teeth, sharp claws, and scaly skin. Perhaps the most distinctive feature on iguanas are the spines that run down their backs.

So in terms of looks lizards and iguanas look very different.

What are the Colors Are Lizards and Iguanas?

As stated earlier in this article, there are thousands of lizard species. They all have somewhat different looks and colors. You can probably find a lizard specie in whatever color you like be it red, yellow, blue, red, tan, brown, black, or green.

However, it is very rare to find a lizard with just one color throughout its body. Most lizards have got color patches and different colored heads, bodies, limbs, and underbellies.

Iguana species are also available in a variety of colors.  The most common iguanas include grey, blackish, blue, and red-colored iguanas. It is rare to find an iguana with just one color just like it is rare to find a lizard with one color.

How Do Lizards and Iguanas Breed?

All lizard species breed by either laying eggs or giving birth to live young ones. Most lizard species that lay eggs do not protect their eggs. They just bury their eggs somewhere and leave.

Like some lizards, iguana species breed by laying eggs. The mating season for iguanas is the rainy season. During the season, male iguanas fertilize the eggs inside female iguanas. The females then carry the fertilized eggs until the dry season commences. They lay the eggs shortly after the dry season commences. Usually, they lay between thirty to fifty fertilized eggs at a go. They lay them in-ground to protect them from predators. Iguana eggs usually tank between 2.5 and 3.5 months to hatch.

How Different Are Lizards from Iguanas In Terms of Body Size?

Iguanas also vary in size. Some species only grow to 12 cm long, while others are capable of growing up to 200 cm (2 meters) long. The smallest size iguana species weigh about 500 grams, while the big ones can weigh as much as 6 kilograms.

How Different Is the Lizard Diet From the Iguana Diet?

Iguanas are generally considered to be herbivorous. They like eating plants, herbs, figs, flowers, buds, leaves, and so on. However, the very big ones are also known to eat small mammals and birds.

In my opinion, because most pet iguanas prefer eating fruits and vegetables aka what you should also be eating, they are easy to feed and care for. This is, in contrast to many pet lizard species that require a constant supply of live prey such as cockroaches and ants which can be somewhat difficult to find.

Are Lizards and Iguanas Venomous?

All but two lizard species are known to be non-venomous. The two lizard species that are venomous are the Mexican Bearded Lizard and the Gila Monster. The good thing is that they are both easy to identify by their appearance and, therefore, easy to stay away from.

While venomous lizards exist, truly venomous iguanas are not known to man. Most iguanas produce a venom that is harmless to humans. So they are not truly venomous.

What is the Lifespan of Lizards and Iguanas?

Lizards have a relatively short lifespan. Most lizard species do not live beyond one year. In contrast, Iguanas are known to live for very long. Some iguana species can live for as many as 20 years.

So if you are looking for a pet that will become your buddy for many years, get an iguana.

So. What are the Best Pets, Lizards, or Iguanas?

In my opinion, Iguanas are better pets than lizards. This is because they are easy to feed, somewhat intelligent, fascinating to watch, exotic, and live much longer than lizards. The only drawback to keeping a pet iguana is that it is going to cost you a lot of money to buy it and to build a nice enclosure for it.

Lizards and iguanas both belong to the reptile group of vertebrates. Iguanas are actually a type of lizard. Therefore, they are not very different from lizards in many aspects. However, they are also different from most lizard species in several ways including their colors and the foods they eat. In my opinion, iguanas make better pets than lizards because they are more fascinating and they live longer.